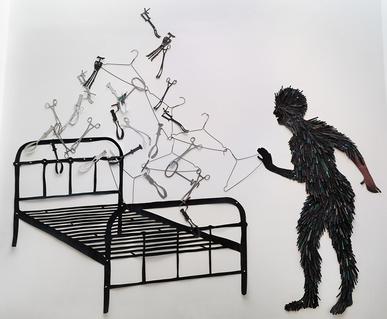 "4 a.m. Reproduction" is one work from the series "The Suburbs at 4 a.m." In 1932 Swiss artist Alberto Giacometti created a work titled The Palace at 4.a.m.  This piece drew heavily on the artists personal experience -a brief, sex-laden encounter with a woman known only as Denise, and automatic art making techniques gleaned from association with the Surrealist movement. The work read as a dream sequence – a stage like scene, with a suggestive narrative and clues indicating the presence of people of privilege engaging in the activities at a luxurious palace in the middle of the night. My work has been made in response, and like Giacometti's work it is not intended to be a linear, illustrated story. It is instead a deliberately ambiguous and rambling mess of complicated impressions that may come from the mind of a suburban insomniac  in the middle of the night. The work references ideas about gender, labor, witchcraft, and the current climate in the United States (where women continue to be relegated to retrograde stereotypical roles.  For example, a time when women’s work outside the home is still only valued at 80% of their male counterparts. A time when the body of a woman does not belong to her after the point of conception, she is a mere vehicle for guestation. For the women depicted in these works there is a niggling sense of impending doom associated with the threat of diminished rights over their own bodies; the future is anything but bright and shiny.

This bedroom scene is constructed with a sparse, metal framed, institutional style bed.  There is a cascade of wire coat hangers and tools connecting the figure and the bed.  The tools are in fact medical instruments which have gynecological applications within western medical practice.  The coat hangers have an obvious reference to the consumption of fashion (an entirely appropriate indulgence for a lady). However, in this context I refer to the sinister history where deviated application sees the coat hanger being used as a tool applied to curtail unwanted pregnancies.  I wish this work was irrelevant - it stands as a piece related to the (ever diminishing) reproductive rights of women in the USA today.